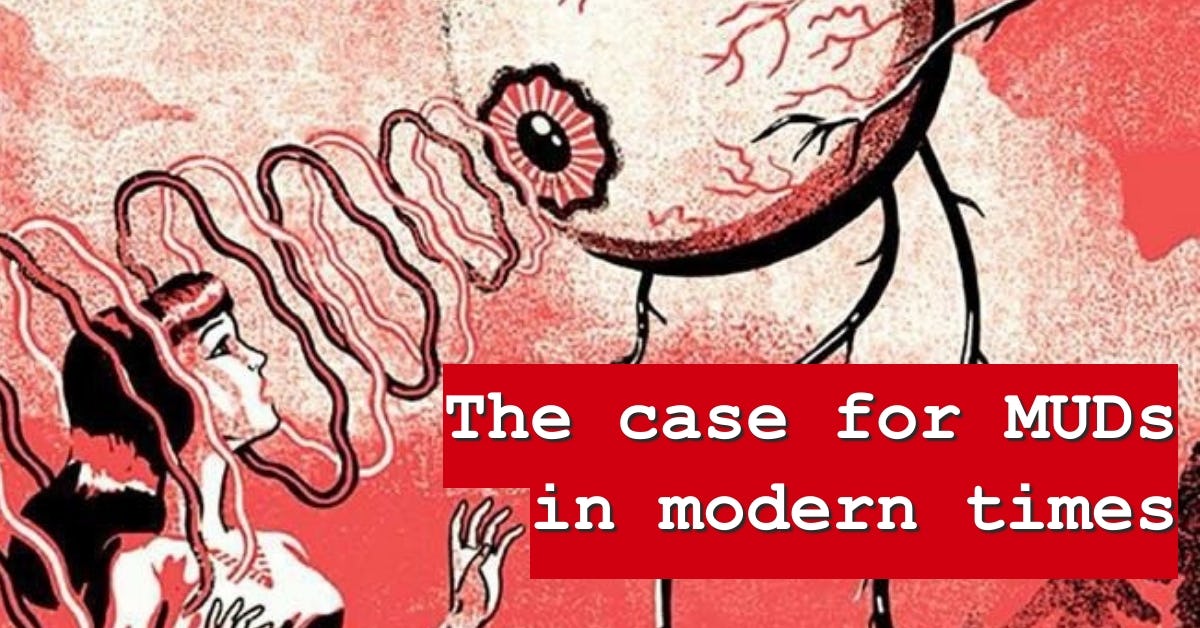 The case for MUDs in modern times

In the age of smart devices and instant entertainment, can a medium as old as MUDs survive? Driven entirely by text, these Multi-User Dimensions ― or Dungeons, or Domains, or so many other options that they’re often called MU* ― are virtual worlds that consist entirely of text. Often outfitted as RPG-style games, these platforms are also home to niche internet communities on the fringes of the web. The servers are accessed via a telnet client, which is easy enough to launch in a command line. But there are a few popular applications that many longtime players opt to use. They’re rather reminiscent of the various chat programs built up around the IRC protocol, and provide simple functionality like logging, colors, aliases, triggers, timers, and even mapping.

At this point, if you’ve never played a MUD before, you might be very confused by this prospect. An online game that’s entirely text? How does it work? More importantly, why would anyone play that?

When I first stumbled across MUDs as a preteen, that was my initial reaction. I was an avid reader, but the idea of playing a game that was entirely text felt more like work than fun. Perhaps it did feel like work a bit in the beginning, but I picked up the controls pretty quickly, and soon things felt very natural to navigate. In a typical MUD setting, you are represented as a textual avatar inside of a space called a room. A room has a written description and a list of objects that are inside that room. A room can be anything: a lion’s den, outer space, an old crypt, a classroom, a wide prarie, or even a coral reef! Your avatar can interact with the game world and its contents via commands you enter. These can be as simple as 'get sword' but can be as expansive as any imperative clause. Some MUDs have robust command systems that allow you to be verbose, like 'look at gemstones on tiara' or 'pilot ship 500 meters north', and intricate complexity can follow.

These concepts will be very familiar to you if you’ve ever played interactive fiction (IF), which can be best described as the single-player version of MUDs. There are many similarities between IF and MUDs, but the latter is focused on collaborative (or competitive) effort in a realtime environment.

In a MUD, the environment is constantly changing, producing a sense of place by reacting to stimuli. As a virtual world, it simulates various systems with varying levels of complexity, depending on the codebase and the design of the environment. This ever-churning simulation is the heart of what makes a MUD so uniquely interesting. These systems can simulate time, weather, economies, NPC schedules, and more ― all of which work together to create an interconnected environment that can be navigated by your avatar and interacted with via verbs. The intricacies of these simulations can vary wildly between games and different codebases. Some MUDs provide a more straightforward hack-n-slash environment where players collect items and kill monsters to gain experience and get stronger. These types of games are essentially programmed rulebooks, replacing the role of a GM (Game Master) in a tabletop game and instead handling all of the combat, dice rolling, skill building, and inventory management that you would otherwise be doing with pen and paper around a table. Other MUDs provide a completely freeform environment, with no rules, items, or NPCs. Players in these environments are provided a canvas and often expected to roleplay their interactions within the environment, collaboratively writing a story with other players ― with or without the interference of game administrators. Some MUDs fall somewhere in the middle, leveraging the best of both worlds to provide unique experiences.

As computers grow more interconnected with everyday facets of our lives, they further become tools through which we can manipulate the real world around us. A surgeon can perform surgery from the other side of the planet with robotic arms and a camera, for example. The unique sensation and phenomenon of interacting with the world through technology can bestow a sence presence that’s come to be defined as telepresence. Telepresence refers to the experience of controlling objects remotely, and the sensation people have when they interact with and immerse themselves within a virtual environment. In the study of telepresence, scholars such as Rheingold have cited MUDs as being “imaginary worlds in computer databases where people use words and programming languages to improvise melodramas, build worlds and all the objects in them, solve puzzles, invent amusements and tools, compete for prestige and power, gain wisdom, seek revenge, indulge greed and lust and violent impulses.” Turkle similarly wrote that “MUDs are a new kind of virtual parlor game and a new form of community. In addition, text-based MUDs are a new form of collaboratively written literature. MUD players are MUD authors, the creators as well as consumers of media content. In this, participating in a MUD has much in common with script writing, performance art, street theater, improvisational theater ― or even commedia dell’arte.”

This unique sensation of telepresence can come in six unique forms, depending on the user’s level of immersion and their expectations of the virtual environment in which they’re navigating. These telepresence senses include social richness (the feeling one gets from social interaction), realism (such as computer-generated environments looking, feeling, or otherwise seeming real), transportation (also includes users feeling as though something is “here” with them or feeling as though they are sharing common space with another person together), immersion (either through the senses or through the mind), being a social actor within the medium (no longer passive viewers, gaining a sense of interactivity and control), and the medium itself as a social actor.

In fact, until the invention of graphics cards and technologies that surpass the human imagination (haha!), MUDs will be difficult to completely remove from the scene. Imagine a realtime adventure with other people online, as vividly detailed as your favorite book but with all of the agency in your hands? That’s the reality of gameplay on a MUD. We put a lot of emphasis on graphics and visuals for games now, but as hardware begins to plateau, avenues like MUDs will continue to double-down on the experiences that make them so great, eschewing the bridles of resource creation in exchange for pure poiesis. You can spin up a MUD and start writing the environment, making it as intricate as you’d like, and everything you describe costs you the same amount of effort: words. Making a game with graphics is entirely different, with various effects, models, and landscapes requiring more time, attention, and skills than others. In a graphic-based game, not every asset has the same cost associated, and this can place artificial limitations on a game. Developers may opt for a less dramatic or exciting route simply because they lack the time or budget. Whereas in developing a MUD, your only limitation is your ability to describe.

Despite the age and legacy of this type of program, starting a MUD in 2018 can be a difficult process. There are many popular codebases that have been in use for years or even decades, and the command syntax, interfaces, and unique quirks of each of them means that players often develop preferences. These codebases can sometimes be in older programming languages or require complex accompanying databases to facilitate the program. Thankfully, there are codebases available that are fairly straightforward to set up and come with a fair amount of functionality out of the box. It’s worth noting that it can easily take months or years of development for even a team of dedicated creators to build a quality, developed MUD for players, and that’s barely considering the amount of writing and building that has to go into it. Creating unique and compelling gameplay mechanics that are balanced and engaging is a mixture of art and science that many MUDs still struggle to get right. Because I am a JavaScript junkie, I’ve done a fair amount of tinkering in a MUD engine called Ranvier and I recommend this codebase for modern would-be MUD wizards looking to set up a tabula rasafor tinkering. Because it takes such a large amount of time and dedication to create a MUD, I do not think there are any released/popular MUDs out there currently using the Ranvier engine, but the same can be said for many MUD codebases, unfortunately. Due to the nature of niche communities in which MUDs tend to live, it’s fairly common for these virtual worlds to appear, amass players, and then vanish just as quickly as they came. In some cases, the community can recover the source code and try to reboot, but other times the entire content is lost forever. Still, you can find a wide variety of popular MUDS ― some of which have been around for decades ― on websites like Top Mud Sites and The Mud Connector and I encourage you to check one out if any of this piques your interest.

You can read more about my new MUD engine project, Pinwheel, here on my blog.

Ranvier, a MUD engine in JavaScript